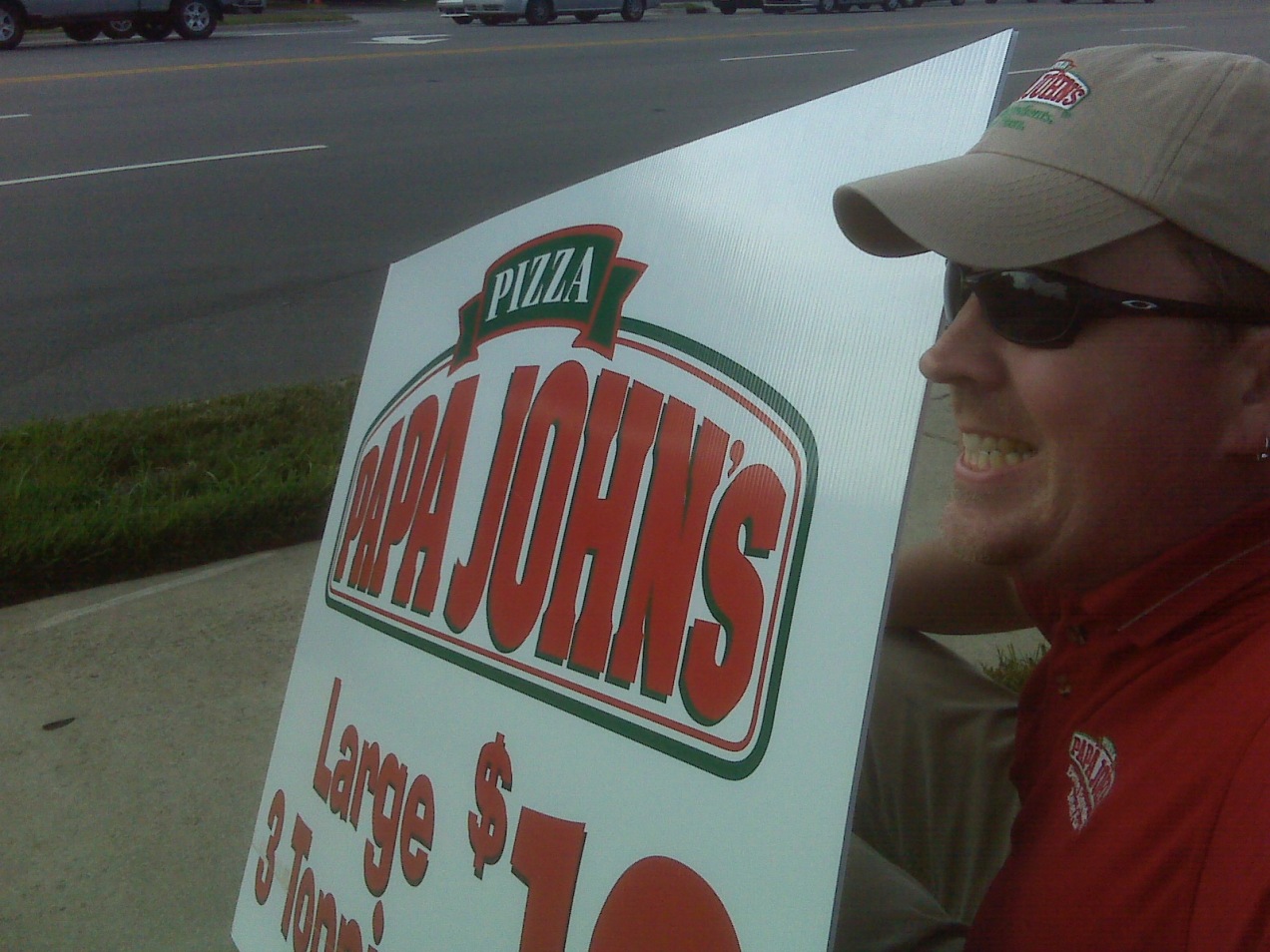 11 days out of rehab in December of 2009, embarrassment came over me again as I started my first job in sobriety: pizza man.

Jobs have always been a strange thing for me. When I was 15 and a half, my dad told me it was time for me to get a summer job. I remember having to go downtown to get a “work permit” which he would have to sign. This allowed me to legally work in certain kinds of jobs, up to a certain number of hours, prior to turning 16. During high school and most of my college years, my first job was working for Toys ‘R’ Us. I worked in the stockroom, occasionally built bikes and Power Wheels cars, sometimes worked as a seasonal cashier, and sometimes on the sales floor. I was proud to have that job.

One weekend, I helped an old man carry a 20′ swingset to his station wagon. He must’ve been around 80 years old, was nicely dressed and very considerate. As he got in his car, he handed me a $50 bill and told me, “Thank you son. Are you in school?”

“Good on you. Then you have something to look forward to. You know what the point of jobs like this are, don’t you?”

I felt deeply ashamed and embarrassed. I was no longer proud of my job. From that moment on, I carried a single lesson in my heart: people judge you based on your job. Always try to have a job that makes you look as important as possible – or at least SOUNDS as important as possible. As the weeks went by, the memory of meeting that man faded. But I never forgot the feeling of embarrassment. As it turns out, I frequently drank and used because of that embarrassment.

Fast forward to 2009, and there I was, a college graduate with 14 years of experience in design and advertising, “reduced” again to minimum wage work – delivering pizzas. I had never worked for a restaurant in my life, save for 3 months at a coffee shop. I was quietly “let go” from that position due to my utter inability to properly make gourmet coffee drinks, and a desire to eat company cookies on the job without paying for them.
I was lucky to get the pizza job. It was 3 days before Christmas, and no one was hiring seasonally anymore. And even though the store was part of a major pizza chain, they happened to still be taking paper applications. Most corporations now only take applications online, and applying for a minimum wage job online is a lot like throwing a penny in a fountain.

At the start I was still going through mild withdrawal symptoms, shakes and such. It was hard to cover up, but I did the best I could. My first week was a trainwreck. During my second or third night delivering, i was so nervous i forgot to put the parking brake up in my car. As i walked proudly to the customers with their pizza, one of them politely informed me that my car was rolling down the hill. Without a moment’s hesitation I turned and ran down the hill towards my car, tripping and falling flat on the pizza (which had landed upside-down). Fortunately the car veered slightly to the right and stopped on the curb. Crestfallen, I returned to the store, brought them their remade pizza and drove back to work. I chuckle now when I think about it, but that night I cried the entire way back.

While working, I was attending outpatient treatment at the same county facility that essentially saved my life. My psychiatrist recommended an SNRI called Effexor to me. 2 days after beginning my regimen, I felt like a new person. The knot in the pit of my stomach which had plagued me for the majority of my life, even prior to adolescence and into early childhood – a knot which, again, I frequently drank and used to drive away – was gone. As were the shakes.

I can’t over-emphasize how this discovery was a VERY lucky break. Most of those suffering from any kind of mental disorder have to try several different medications before landing on the “magic bullet.” And I couldn’t take “benzos” (ie. Benzodiazepines, as I had abused both Xanax and Klonopin in my last months before treatment). From this point on, the job got easier. I had a home in an Oxford House. Bills started to get paid. I was also able to apply for food stamps, and realized something: I wasn’t embarrassed anymore. The old me would’ve been. One thing I came to understand is that these social services, like food assistance and healthcare, are available to anyone in need regardless of race, color, background or circumstance. We all have the potential to end up in the path of the tornado.

During my tenure as a delivery driver, I saw many different sides of drug use and abuse. On New Years Eve, I watched a drunk driver going the wrong way down a major thoroughfare. That same night I delivered pizza to a hotel room where a guy and his girlfriend, both barely clothed and dancing around ran to the door to see me. The gentleman was so stoned me gave me a $20 tip, as he couldn’t count the money in his wallet. I also once delivered pizza to another gentleman in a hotel room. His girlfriend was a waitress at a restaurant next to our store, and bought him pizzas every day with some of her tip money. She had us deliver them to him at the hotel, where he drank and smoked crack. Some part of me is still trying to determine where the symbiosis was in that relationship. He never once tipped me.

I delivered pizza to an older man living in one of the poorest neighborhoods in Raleigh. His apartment smelled of urine and feces, and frequently he answered the door having been drunk for days, holding an empty fifth of Seagrams gin in his hand. In another neighborhood not far down the street, I delivered pizza to a father, his girlfriend and 3 daughters. He realized he didn’t have the $28 he needed to pay for the 14″ pizza, wings and drink he ordered. Putting down his drink, he ran across the street to get cash out of the ATM – which was in a grocery store. A store where he could’ve probably purchased 6-7 store brand pizzas and a 3-liter soda for his family for about half the cost.

In contrast, I also delivered to some of the richest neighborhoods in Raleigh. I once brought a “10 pie” (ten pizzas) to a kids’ birthday party. It was 10:30 in the morning and most of the adults had either a beer or a glass of wine in their hands. Honestly, I can’t really say much. I used to dose myself on GBL and take shots of vodka as early as 9am sometimes. As the joke goes, “you can’t drink all day unless you start in the morning.” Little kids love the pizza man, though. You’re their personal hero. You may not have anyone else’s respect, but you have theirs. Their smiles always made it worth it.

Most of the people I worked with at the store were in their late teens/early 20s, all thinking they were invincible and bulletproof. They would often joke about drugs, and brag about how much they could smoke or drink. Frequently I would joke back, and provide a warning: “…but it doesn’t stay that way forever.” I wanted to tell them the truth about me, about what I was facing, but was afraid of losing my job. Everything was so precarious. I wish now that I had done things differently. I’m not proud of that.

I learned a lot along the way. Most importantly, in any station in life you should always give a thing your best effort. Try to care even when those around you don’t. Don’t let their attitude affect yours. As much as my recovery is in my own two hands, so is my life. I might impress my cool, lazy co-worker if I joke about being lazy. But that won’t help me when I’m in the poor house.

I’ve heard the phrase “fake it til you make it” often in recovery. Personally, I don’t believe that for a second. I’ve found that living deliberately is much less dangerous than living life passively for lack of a better option. If you don’t like the food, don’t eat at the restaurant. If you don’t really believe in God, don’t go to the bible study. Putting in face time won’t change your soul. I go to the meetings that I go to because I get something out of it. I have a sponsor because he helps me. I take Effexor because it *works* for me. I work – whether delivering pizzas or sitting at a desk – to earn money and do my best for those I love.

One more day to be grateful 🙂