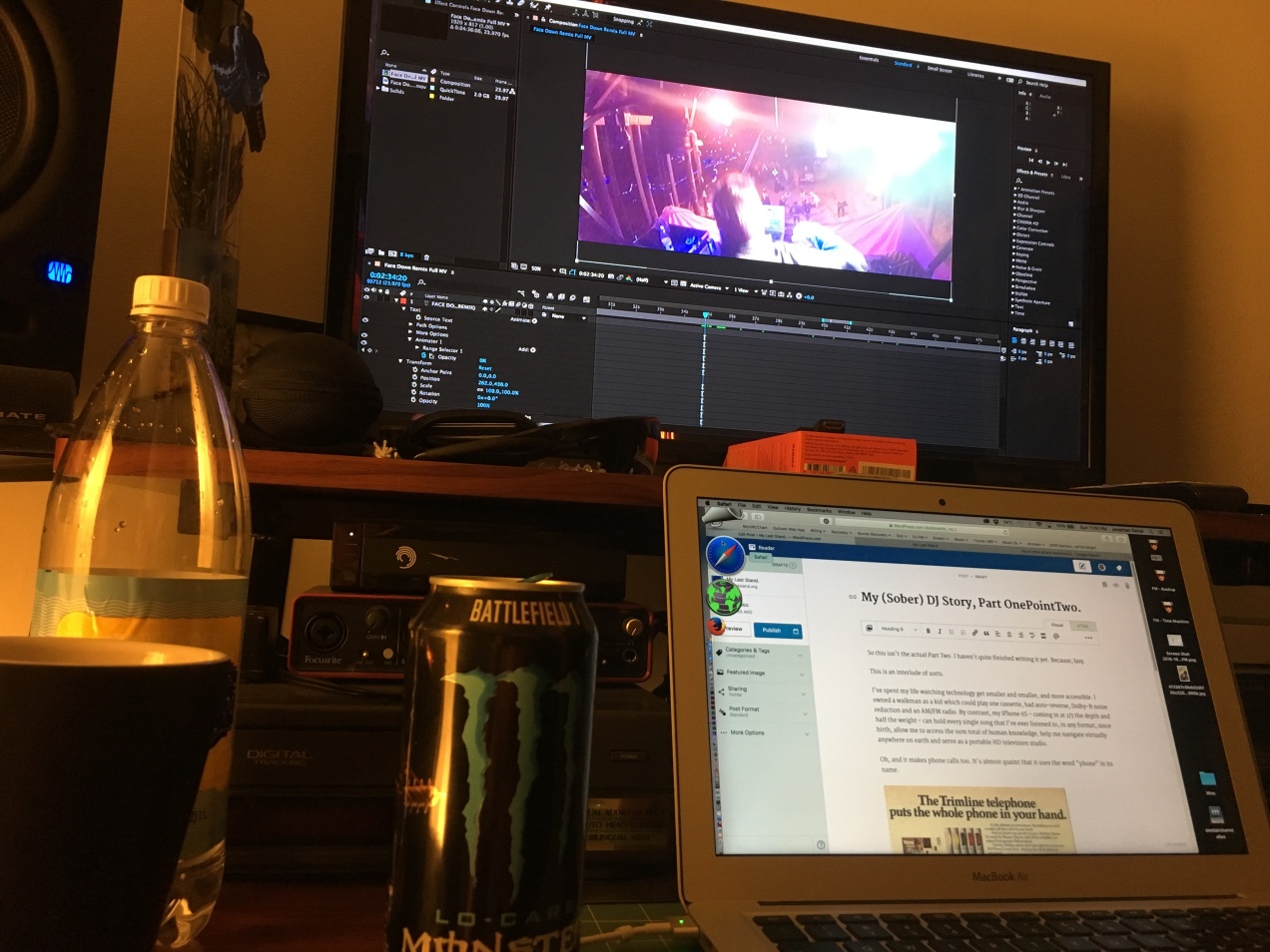 So this isn’t the actual Part Two. I haven’t quite finished writing it yet. Because, lazy.

This is an interlude of sorts.

I’ve spent my life watching technology get smaller and smaller, and more accessible. I owned a walkman as a kid which could play one cassette, had auto-reverse, Dolby-B noise reduction and an AM/FM radio. By contrast, my iPhone 6S – coming in at 1/3 the depth and half the weight – can hold every single song that I’ve ever listened to, in any format, since birth, allow me to access the sum total of human knowledge, help me navigate virtually anywhere on earth and serve as a portable HD television studio.

Oh, and it makes phone calls too. It’s almost quaint that it uses the word “phone” in its name.

(This was the “phone” we had when i was a kid. Trimline, SON! And it came in more colors than the iPhone!)

With that in mind, I made my first full-length music video over the weekend, using footage I took at various gigs since I first got sober. I used nothing more than my MacBook Air, the same iPhone I mentioned above, iMovie and Adobe After Effects. A $4,000 investment, tops. Not counting what it cost to produce the song, using the same laptop, and other software. Not 15 years ago, these endeavors would’ve required huge studios, crews, hundreds of man-hours. The democratization of technology really allows us to express ourselves in any way we choose.

To any millennials who may be reading this, make no mistake: we live in remarkable times.

(So meta. A picture of the video I made, with the blog post I’m writing about it – as I write! Dear Apple, I love the walled garden you’ve built.)

In early sobriety, everyone’s expectations for you drop. So every little thing you do sober is much like when a baby takes its first steps.

At first, it feels good – everyone congratulating you on every little thing accomplished. After awhile, for me, it became patronizing. I DJ-ed my first sober gig in a bar and everyone who knew me came up to me to tell I played better than I ever had in my using days – which I found very hard to believe. Again, I knew they meant well, it just seemed a bit much.

Now, 7 years into the process, two rehabs and one relapse later…I have the footage to prove they were actually right. Hours and hours of it.

I find it a little more than coincidental that technology has arrived at the place it is – and my sobriety has brought me to the place where am – that I can write a piece of music while living in a Oxford House and seven years later have the footage to prove I can DJ sober AND use said footage to tell the story.

I truly have been able to “face down” all the demons I’d been holding onto for so long. Enjoy the video.